In addition to surgical procedures, irradiation plays an important role in treatment. Esophageal tumors are irradiated preoperatively or without a surgery if this is not possible for any reason. In conventional photon irradiation, it is very problematic to capture the entire irradiated area without a significant radiation dose to the lungs and liver. In contrast, the required dose in proton radiotherapy can be easily delivered to all the necessary areas and the curative effect can be achieved at significantly lower risk.

Suitability for proton therapy is tied to the exact location of the tumour in the esophagus.

Proton irradiation has been applied in the treatment of HCC for over 20 years. The most experience comes from Japan, followed by the USA. The number of treated patients has already reached thousands and the number of printed publications is more than one hundred (Phase III or Phase II studies). 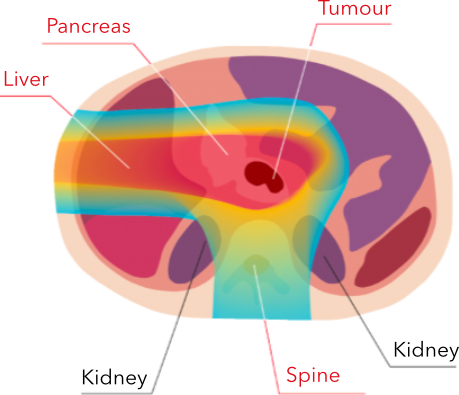 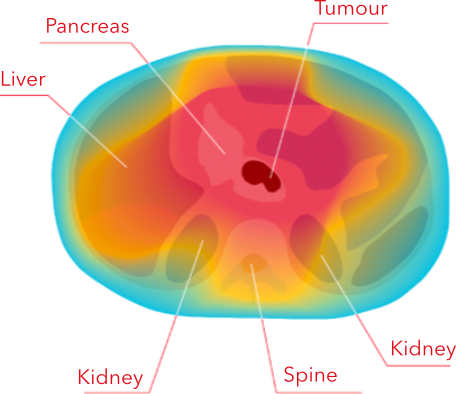 Photons irradiate the tumour as well as the healthy tissues and organs around it.

For irradiated volumes in the upper abdominal cavity, i.e. in the treatment of pancreatic or hepatic tumors, compared to standard radiotherapy, proton radiotherapy:

For irradiated volumes reaching into the chest cavity, such as in the treatment of esophageal cancer, compared to standard radiotherapy, proton radiotherapy:

Proton therapy can be used to deliver a sufficiently high and effective dose of radiation to the area affected by a tumor, with a tolerable radiation dose to the surrounding and vulnerable organs such as the liver, kidneys, stomach, duodenum, small intestine and spinal cord.
Proton therapy can also be used to deliver an effective dose to the area of regional lymph nodes, which are also often affected by cancer.

To learn more about proton therapy for gastrointestinal cancer, or to find out if you are a suitable candidate for treatment at our centre, contact us today. Our team will get back to you with a detailed response as soon as possible.

* Suitability for treatment at our centre must be determined by our medical team.