Proton therapy is a precise and gentle treatment method with minimal side effects. Based on worldwide experience and long-term results in treated patients, it is clear that patients after proton treatment have a higher quality of life compared to those who have undergone conventional (photon) radiotherapy.

Although many people believe proton therapy is relatively new, it’s been around as early as 1946 with treatments on patients starting around 1954. Since then, proton therapy has evolved and expanded to many locations around the world, with the first UK proton centre for ocular tumours opening in 1989.

Unlike conventional radiotherapy, which uses photons to irradiate and destroy tumor cells, proton therapy is more advanced and uses protons. The commonly used photon beam goes through the body and emits a significant portion of its energy both in front of and behind the tumor. However, protons have a physical property, called the Bragg peak, which has the ability to deliver significantly less energy on the way to the tumor and has no impact on the tissues behind the tumor. Thus, the greatest advantage of proton therapy compared to conventional radiotherapy is its accuracy and its ability to protect healthy tissues.

The majority of proton centres throughout the world currently use “scattered beam” nozzles to deliver the protons to cancerous tumours. While scattered beams are extremely effective, a newer generation of beam, known as “pencil beam scanning”, now allows oncologists to treat cancer patients with a higher degree of precision.

At the Prague Proton Therapy Center we use the most advanced form of proton therapy. Pencil beam scanning (PBS) marks the exact distribution of the proton beam dose and is currently the absolute peak in proton therapy technology. Pencil scanning irradiates the target area with millimeter accuracy with minimal damage to surrounding healthy tissues and organs.

To illustrate how PBS works, imagine the task of colouring in a circle on a piece of paper with a pencil. As you fill in the circle, you will focus on making sure that you do not cross the borders. PBS also focuses on staying within the borders of the area being treated. This is why side effects during proton therapy are minimal.

As respiratory movements may impair the correct and precise execution of proton irradiation, in the treatment of diagnoses such as breast cancer, lung cancer, lymphoma… we also use the method of controlled breathing.
Learn more –>

The heart of the Proton Therapy Center is the cyclotron, a type of particle accelerator in which charged particles accelerate outwards from the centre along a spiral path. The particles are held to a spiral trajectory by a static magnetic field and accelerated by a rapidly varying (radio frequency) electric field.

Cyclotrons can be used in particle therapy to treat cancer. Ion beams from cyclotrons can be used, as in protons therapy, to penetrate the body and kill tumours by radiation damage, while minimising damage to healthy tissue along their path. Cyclotron beams can be used to bombard other atoms to produce short-lived positron-emitting isotopes suitable for PET imaging.

The cyclotron was invented and patented by Ernest Lawrence of the University of California, Berkeley, where it was first operated in 1932.

The first European cyclotron was constructed in Leningrad in the physics department of the Radium Institute, headed by Vitaly Khlopin. This instrument was first proposed in 1932 by George Gamow and Lev Mysovskii and was installed and became operative by 1937.

The world’s largest cyclotron is located at the RIKEN laboratory in Japan. Called the SRC, for Superconducting Ring Cyclotron, it has 6 separate superconducting sectors, and is 19 m in diameter and 8 m high. Built to accelerate heavy ions, its maximum magnetic field is 3.8 tesla, yielding a bending ability of 8 tesla-metres. The total weight of the cyclotron is 8,300 tonnes. It has accelerated uranium ions to 345 MeV per atomic mass unit.

In addition TRIUMF, Canada’s national laboratory for nuclear and particle physics, houses one of the world’s largest cyclotrons. The 18 m diameter, 4,000 tonne main magnet produces a field of 0.46 T while a 23 MHz 94 kV electric field is used to accelerate the 300 μA beam.

Dr. Robert Wilson first proposed the use of protons for cancer treatment in 1946. 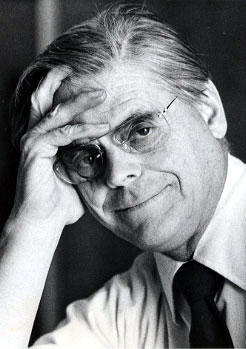 Robert Rathbun Wilson, PhD, has been described as “the father of proton therapy”. He learned high-energy physics at the Radiation Laboratory of Ernest O. Lawrence at the University of California, Berkeley.

He was also a member of one of the Manhattan Project groups that developed the atomic bomb, and headed an immense team of physicists that conceived, developed, built, and operated the Fermi National Accelerator Laboratory (Fermilab) outside of Chicago. Dr. Wilson understood and practiced teamwork and collaboration.

He was a serious sculptor of international renown, whose works are displayed at many universities and research institutions, including Fermilab; he was a firmly committed advocate of human rights, and he championed unceasingly for the peaceful use of atomic energy that he helped to unleash.

Robert Wilson’s contribution to proton radiation therapy was made in a paper he published more than a half-century ago entitled “Radiological Use of Fast Protons” (Radiology 1946:47:487-91). This article established the fundamental tenets and techniques that are being followed today at other proton therapy institutions around the world.

It was at a Fermilab conference in 1985 that James M. Slater, MD, FACR, chairman of Loma Linda’s department of radiation medicine, approached Fermilab’s director, Leon Lederman, PhD, and deputy director, Philip V. Livdahl, about the feasibility of building a hospital-based proton cyclotron. Mr. Livdahl has long shared Dr. Wilson’s interest in the medical use of protons and opined that Fermilab could do so. Also at the 1985 meeting, Dr. Wilson became an avid supporter of the evolving Loma Linda facility and followed its construction to completion and on through to the treatment of its first patient.

Our physicians have many years of experience in radiotherapy. Moreover, they are experienced in both standard (photon) and proton radiation therapy; therefore, they will be able to answer all your questions pertaining to your decision on your treatment.