Target volumes, fractionation and the timing of radiotherapy for individual subgroups of pediatric tumours are specified in the respective pediatric protocols. The rule is that the fractionation, volume and dose are the same as in the case of photon radiation therapy. The advantage of proton therapy is the achievement of greater conformity with a lower integral dose.

Referral from the paediatric oncologist is required!

The Benefits of Proton Therapy

The Advantages of Proton Therapy

Unlike photons, which release maximum energy on the surface and their energy decreases with depth, protons release only a small amount of energy as they pass through the healthy tissues. Just before the end of the proton’s trajectory, the tissue absorbs most of the energy, and there is a sharp increase in the dose (in the tumour) and a subsequent sharp decrease to zero (healthy tissues beyond the tumour). This is called the Bragg peak. The depth at which the Bragg peak occurs is determined by the proton energy. 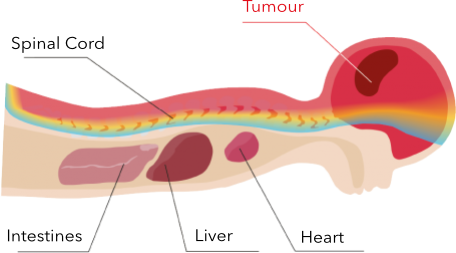 Photons irradiate the tumour as well as the healthy tissues and organs around it.

Proton radiotherapy is associated with the sparing of the tissue “in front of the tumour” (from the perspective of the radiation source) and in particular beyond the tumour. In this way, it is possible to deliver the prescribed dose to the target volume while sparing the healthy tissue (as compared to photon radiation) and improve the quality of life of pediatric patients after treatment.

The percentage of tumours induced by irradiation after proton radiotherapy should drop significantly, since the percentage of irradiated healthy tissue decreases considerably in comparison with photon therapy.

To learn more about proton therapy for paediatric cancer, or to find out if you are a suitable candidate for treatment at our centre, contact us today. Our team will get back to you with a detailed response as soon as possible.

* Suitability for treatment at our centre must be determined by our medical team.