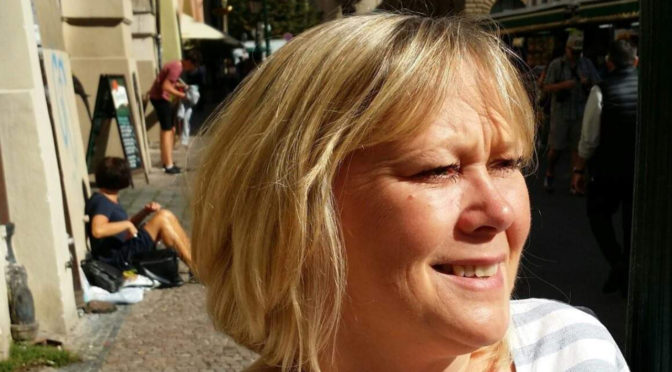 A Lichfield woman travelled to Prague for specialist treatment after being diagnosed with a brain tumour – which threatened to leave her blind. ALEX KELLER discovers more.

When Lisa Hudson noticed her eyesight slowly deteriorating she put it down to her age.

As she was approaching 50 the accountant from Lichfield assumed it was a natural side effect of growing a little older.

But as the months went on Lisa’s eyesight began to rapidly decline – describing it as like someone “dimming the lights” in every room.

Initially Lisa’s optician feared she had a detached retina and sent her to her local A&E in Birmingham. But following an immediate referral to Birmingham and Midland Eye centre it became evident that there was a serious problem.

“It was extremely distressing to overhear a group of medical professionals discuss the results of my eye examination with junior colleagues,” Lisa said.

“When I heard the word tumour my heart sank. My husband and I could not initially comprehend what was being said.”

Lisa continued: “Although the condition had not formally been diagnosed, I think that it’s a normal reaction to assume the worst case scenario when you hear this sort of thing.”

Subsequent scans arranged through Lisa’s private medical cover revealed that she had a benign tumour behind her eye which was pressing on her optic nerve. If left untreated it threatened to leave her blind.

“It was frightening,” she said. “I had no other symptoms. I was one of the few people who could walk around with a brain tumour and not know anything about it.

“The scans showed a mass at the back of my eye. The tumour was also growing around my optic nerve.

“It was squeezing on my nerves and slowing the messages being sent from my eye to my brain, which is why my eyesight was getting worse.”

Lisa’s mass – called a meningioma – developed in the tissue surrounding the brain and spinal cord. She didn’t have headaches, vomiting or seizures normally associated with signs of a benign tumour in the brain.

“I was otherwise totally fit and well,” she said. “Which made it that little bit harder to understand.”

Lisa was given her options by her oncologist – to leave the tumour and gradually see her eyesight fade until it disappeared altogether – or to undergo radiotherapy. Because the tumour was growing around the optic nerve removal of the tumour was considered to be too intrusive.

Lisa said: “I decided to try and save as much sight in my eye as possible. I was only 48 and the thought of losing the sight in my right eye was unimaginable. There were things I wanted to do and see.”

But as Lisa and her husband carefully looked into the long list of side effects associated with radiotherapy she grew increasingly worried about the long term health impacts.

By this stage Lisa had begun to look into other options unavailable on the NHS.

She said: “The only thing the UK offered me was normal radiotherapy, but the problem was it wouldn’t have just affected the area where the mass was, but the surrounding area too.

“My specialist mentioned proton therapy and said I’d probably heard of it because of Ashya King – but I hadn’t.”

Proton therapy works by accelerating protons until they reach half the speed of light. They are then targeted at cancer cells with pencil-point precision.

Unlike traditional radiotherapy using X-rays it can pin-point the exact area to target, preserving healthy tissue in front of the tumour and preventing damage to the tissue behind it.

The technology was at the centre of debate in 2014 when six-year-old brain tumour sufferer Ashya King was taken out of the UK by his parents to begin treatment at the Proton Therapy Center in Prague – against the wishes of his doctors.

Lisa decided to go for the proton therapy but her private medical insurance did not support her overseas, so she financed the cost from savings. Lisa and her husband travelled more than 900 miles to the Proton Therapy Center in the Czech Republic in September 2015.

She spent six weeks having fractions of proton therapy five days a week. Lisa said: “A rubberised mask was put over my face and I had to lie there for around 20 minutes. Most of the time was spent positioning the beam, and only about three to five minutes of it was actually the proton therapy [pictured above].”

After six weeks Lisa returned home and had follow-up tests at the Queen Elizabeth Hospital in Birmingham, where they tested her vision.

“The improvement was dramatic, for example my colour recognition was improved and the sight test showed quicker reaction to light recognition.” she said.

“The actual tumour hadn’t reduced in size but the idea is that it doesn’t get any bigger. And I think over time it will shrink.

“The treatment itself was never going to remove the tumour but the idea was to alter the DNA so it wouldn’t continue to grow.

“At the end of the day I wasn’t expecting miracles. I didn’t expect the sight in my eye to be fully restored, but the treatment has potentially saved the vision on my affected eye.”

She added: “I just thought that as you get older your sight deteriorated. Looking back, I had also been seeing flashing lights and thought it was a migraine. It was like psychedelic lights flashing in my face – but it was obviously the early signs of my tumour.

“I should have gone to the doctors before, however the tumour was slow growing and going months earlier wouldn’t have made much difference.”

Lisa is full of praise for the Proton Therapy Center and says she’s fortunate she could afford private healthcare.

She said: “By the time I’d got my NHS appointment letter through I had already had three private medical consultations and two MRI scans carried out. I had also organised my treatment in Prague.

“I am so fortunate I was able to pay for my own treatment. The team in Prague were fantastic and looked after us so well.”

Two new government-funded proton therapy centres are currently being built in London and in Manchester, but are not expected to become operational until 2019.

Until then a very small number of NHS patients are referred overseas.